Want to Become a Member?

Interested in becoming a member but still have some questions? For more information, use our contact form or download our membership form directly. We look forward to hearing from you!

Facebook has had some chatter: rides to lunch or meet for lunch

Membership page has the NEW member and RENEW member forms.

While riding our 1996 R1100RSL a couple of weeks ago, the clutch free play went from normal to more than plenty. Suddenly. The clutch would disengage but the lever had to be almost all the way to the grip. It felt like the cable had snapped yet it was still functional. We tried making adjustments at the bar but could not re-establish anywhere near the correct free play.

After returning home I was able to reset the free play by the book. 12 mm at the lever with the 7 mm gap set via the clutch release lever adjustment at the back of the gearbox. But I had to turn the adjustment bolt in about 5-6 turns. That's a lot!  The cable appeared to be correctly routed and positioned. Something apparently broke inside the casing that was providing tension to the cable. After much internet searching it seemed to point to a thrust or throw out bearing.  When the engine is running, gearbox in neutral, and clutch lever pulled in, there was a chirping sound coming from the back of the gearbox. Release the lever and the sweet chirping disappeared. Visions of $ swirling in my brain.

I called Jon at Capitol BMW and decided that if he estimated the repair at more than $500, I was rolling the bike into my family room [where I worked on an R90S one winter] and doing it my ownself. Jon confirmed that it sounded like the throw out bearing, described the repair in Jon detail [which includes removing the final drive and swing arm] with a total cost of $267. Appointment is this Friday! I'm hoping to get the old throw out bearing back and take a picture next to the new throw out bearing so I can get a better appreciation of the 'parts stack' than from the exploded diagrams.

The gearbox [from what I understand] does not have to come off. Swing arm removal allows access to the clutch release lever mechanism attachment bold [vertically installed]. Apparently it can not 'drop down' and clear because of interference with the front of the swing arm. We'll see. 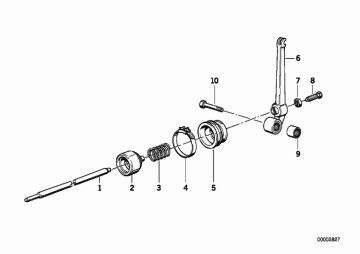 I dropped off the R1100RSL at Capitol BMW around 11 AM. They called at 2:30 PM saying it was ready for pickup. The throw out bearing [#02] had collapsed allowing the rod [#01] to penetrate too far into the assembly, increasing the free play in the chain of command. The gearbox did not need to be pulled for this service although the swing arm had to be dropped.

A collapse in my case meant the ball bearing had failed internally. The outer plastic casing of the piston was not melted [does happen] or broken. This is a very small piece [about the size of the sweet end of a Tootsie Pop]. Barrel shaped, measuring 2.0 cm long by 2.8 cm wide. The internal bearing is pressed in place and is about 1.2 cm in diameter. The ball bearings are therefore teensy. Lubrication is apparently provided only at installation and I noticed that the new piston had a dollop of grease pre-applied when Jon opened the box for my amusement. 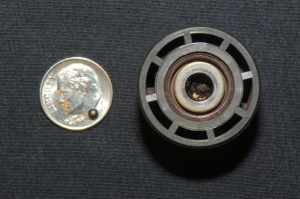 Old Bearing and teensy balls within