Want to Become a Member?

Interested in becoming a member but still have some questions? For more information, use our contact form or download our membership form directly. We look forward to hearing from you!

Meet at the Sheetz near Cabelas

There will be a stop at Spiveys Corner along our Route. Bring cash for lunch at Paul

Facebook has had some chatter: rides to lunch or meet for lunch

Membership page has the NEW member and RENEW member forms.

How to Split the Case of a Garmin 276C

Any owner of the Garmin 276C GPS (or for that matter any member of that family of GPS) will at one time or another realize that their "friend on the road" is a little sluggish at acquiring satellites when turned on and is real poor at remembering the date and time between uses.

Yes, it began happening to me a few months ago and is apparently quite common after a few years of use. The 276C has not one, but two batteries and it's the one that's hard to get at that causes the problem. There's a tiny Lithium battery (like a hearing aid battery) soldered onto one of the circuit boards. It's rechargeable, but over time it begins to fail like any rechargeable battery. When this happens, the GPS starts to have a lot of trouble establishing a fix on your position. It could try for hours and still not be successful. The work around is to tell it to start fresh with a new position and I've had to do this on several occasions.

Ed Gray and I had been discussing my memory problems (ahem, my GPS's memory problems) and he turned up a posting on ADVrider.com showing step-by-step picture-based instructions for disassembling and replacing the battery. Even though I'd done my share of soldering fine-pitch components over the years, my initial response was "No way. I'm going to take my changes with Garmin and have them do the work." Knowing that the unit is supposed to be waterproof, I figured, splitting the case open would be the wrong thing to do.

In late April, I finally got motivated to call Garmin and see about securing return authorization for the repair. A 20-minute wait on hold with Garmin's illustrious technical support number frustrated me enough to say "Screw it! I'm going to do this myself." Besides, I'd heard wildly varying stories of just how much Garmin charges to replace the battery and well, I'm cheap - just ask Elizabeth. A few minutes of Internet research turned up more helpful information about the battery replacement, including a specific part number for the replacement battery (the posting on ADVrider left a bit to the imagination, but at least suggested adapting other batteries to the job - not so good). The aviation folks have been chasing the same battery problem in their GPS models and the Beech aircraft forum had a more complete take on the replacement.

Within a few minutes, I had the prescribed ML621-TZ1 battery on order from DigiKey. In fact, I knew the shipping charges were going to be more than the price of a single battery (~$2.50 ea.), so why not order five! A couple days later the UPS guy delivered my little box of batteries. Now what?

Back to the Internet I went. The ADVrider posting shows the same fine set of pictures on how to disassemble the 276C as the Beech aircraft forum. I'm really not sure who the original author and photographer was, but somebody plagiarized somebody's material along the way. Oh well.

I set up the laptop on the kitchen table so I could consult the Internet while performing surgery. Next, I gathered up my trusty Weller soldering iron and my good old fully leaded solder. Note: Only fine-tipped, low-wattage soldering irons need apply for this job. Oh, and I made a trip to Ace Hardware for one of those cool little Phillips screwdriver kits (previous bad experience with cheap screwdrivers and a piece of ham radio gear put the fear of God in me).

With all my "tools" in place and the lights turned up over the table, I started my surgery. With the main battery removed (the one that snaps out of the back), I removed the ring that secures the antenna's BNC connector. This step is a bit tricky as one really should use some sort of spanner wrench for "safe removal." Not having one, I used a small straight blade screwdriver to "tap" the ring loose and after a few turns it was off. I then removed the eight screws that secure the two case halves together. Time to split the case!

Grabbing one half of the case in each hand, I tugged and pulled, but no luck. What the...? Another screw? No, I didn't see any and the Internet didn't offer any advice either. I grabbed my small straight-blade screwdriver again and found a spot to carefully wedge it in between the two case halves. Click. I heard the sound of success and saw the cases start to come apart. Apparent, the rubber seal that makes these things waterproof had the plastic halves stuck together pretty well. That's probably a good thing. 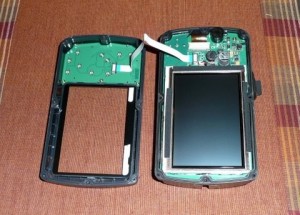 Within a few seconds, I had the things apart and was following the "pictures" from the Internet to make sure I did things in the right order to safely get to the offending battery. I won't bore you with the rest of the disassembly details at this point, but within a few minutes I was applying heat and was tugging on the old battery to get it extracted from the circuit board.

Noting the orientation of the positive lead on the old battery, I aligned the tabs of the new battery to the pads on the circuit board and applied more heat. A little extra solder later and things were sticking the way they should be. I became a little concerned when I noticed a tiny surface mount component just to the right of where the negative lead of the battery attaches to the board. With my aging eyes, it looked like I had succeeded at creating a nice solder bridge between the battery lead and that component. Not good. More heat and a little careful work with the tip of the iron and I had the solder back out of the way and all was expected to be good.

Reassembly went pretty well until I realized that a very small ribbon cable connecting the front panel buttons to one of the circuit boards had come loose. Patience Brian, patience! Whew! I got it back in the mating connector and secured after a few tries. Within a few minutes, I had everything tucked and folded back in place and the case halves aligned again. With the screws back in place, it was time to carefully "tap" the ring securing the BNC connector tight again. All done and it only took 45 minutes, including taking time to snap a few pictures along the way.

It was time to see if it was all worth it. With the main battery snapped in place, I held my breath and pressed the power button. Well, would you look at that? No smoke came out and the display came on just as one would expect. I ran upstairs where I knew it would hear the satellites through the roof and within a few minutes it had completed the initial acquisition and was happy as a pig in slop. Subsequent power-ups showed consistently quick re-acquisition and there was no more forgetting what time it was either. Waahooo!

What did I learn? My eyes are aging. I fought with my glasses when trying to look closely at the circuit board, especially when I was worried about that tiny component next to the battery. Next time, better lighting and a good magnifying glass will be used.

Speaking of next time... Since I have four more batteries I'm willing to help others "fix" their 276's when the time comes. I'm willing to do the soldering if you are willing to split the case. What do you say?